Home›Book Quotes›10 Best Quotes From "At Home: A Short History of a Private Life" by Bill Bryson

10 Best Quotes From "At Home: A Short History of a Private Life" by Bill Bryson 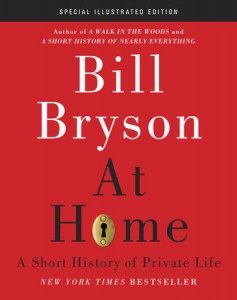 At Home: A Short History of a Private Life by Bill Bryson

With his signature wit, charm, and seemingly limitless knowledge, Bill Bryson takes us on a room-by-room tour through his own house, using each room as a jumping off point into the vast history of the domestic artefacts we take for granted. As he takes us through the history of our modern comforts, Bryson demonstrates that whatever happens in the world eventually ends up in our home, in the paint, the pipes, the pillows, and every item of furniture. Bryson has one of the liveliest, most inquisitive minds on the planet, and his sheer prose fluency makes At Home one of the most entertaining books ever written about private life.

10 BEST QUOTES FROM "AT HOME" BY BILL BRYSON